Ever heard of the GAPS diet? Well, neither had I up until six months ago. Then my life took a HUGE turn and many steps in the right direction. It’s an amazing temporary diet that works to heal the digestive system to cure you of all manners of autoimmune disease. It’s very similar to the Paleo Autoimmune protocol, and based on the original diet, the Breaking the Vicious Cycle
.

I’ve written quite a bit about this unknown, but miracle GAPS Diet, based on the book by Dr. Campbell, Gut and Psychology Syndrome in this post. It is an amazing and comprehensive diet that has cured thousands from auto-immune diseases like acne, eczema, psoriasis, ADD, ADHD, food intolerances, fibromyalgia, irritable bowel syndrome, ulcerative colitis, seasonal allergies, and even autism and schizophrenia. If it sounds too good to be true, it isn’t. It really works but it takes dedication and hard work as it is probably the most restrictive diet on the planet! You have to eliminate white sugar (only sweetening with honey or stevia), remove all grains (rice, corn, wheat, etc.) and all processed foods.

We Went on the Full GAPS Diet 5 Months Ago

I chose to put my family on the full GAPS diet about five months ago as two of my children were starting to develop eczema and I’ve struggled with it most of my life. I had gone gluten-free six months before that and it was not curing my eczema, plus I was struggling with fatigue, pain all over my body, irritability, depression, major brain fog and anxiety. I was amazed at how after just one week, not only was my eczema much better, but my energy was better than it had been in many years, the pain was nearly gone, depression and irritability greatly improved!

I rode that high right on through the holidays and didn’t even feel like cheating because I was feeling so good, until I reached a plateau and my eczema started flaring back up. Plus, the irritability and depression would sneak right back in with it. I knew when I went on this diet that the intro is the most important part, as it’s the stage where you work on healing the gut lining, as a damaged gut lining allows for leaky gut, which causes all manner of diseases and problems. But I just couldn’t go from eating processed junk food to the intro GAPS diet without feeling extremely overwhelmed, so I did the full diet at first. It was definitely the right decision as now I fully understand the diet, and the importance of eating real food and good fats, soaking grains, and am truly ready for the hardest step. So, I’ve finally been on the plateau long enough that I’m ready to fight the rest of this battle. I need eliminate all potentially irritating foods and figure out what is bothering and heal my gut at the same time. 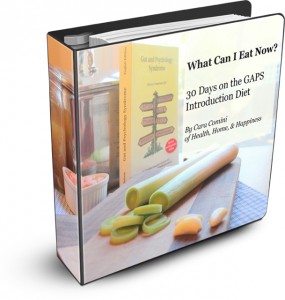 I bought the eBook from Health, Home and Happiness, “What Can I Eat Now? 30 Days on the GAPS Intro Diet” to help me along, and it has been very helpful. She breaks it down into step-by-step instructions, even giving meals for breakfast, lunch and dinner for 30 days. It has taken SO much of the stress out for me as I’m having to cook for my family three times a day, so doing a separate meal plan for me also was just making my head spin!

I’ve taken the past two days to prepare for the diet – I took Cara’s advice from the book to buy the veggies like carrots, onions, leeks, cauliflower, garlic and more in bulk, chop them all up, put in zip lock bags, and freeze so my meals are much easier to make. This took about two hours, but I did it after all the kids were asleep last night and watched TV on my iPad at the same time, so it made it much more pleasant to have “Scandal” as my friend. My back and feet ached afterwards, though, but I do think it’ll be a lifesaver so I’m not doing so much work to make meals for my three kids and me at the same time.

Eczema – I wanted to share how I’m feeling and doing before starting the diet, to see if there’s a difference later on. Currently, my hands are covered in eczema. They itch, burn and feel rough. They are in bad shape. I have been cheating lately and had grain like rice, and have had a few organic lollipops (which have sugar and that’s not allowed, even cane sugar). Plus, I had some cheese, but it was raw milk cheddar cheese, which is allowed on the diet. So, I’m not really sure why I’ve flared up again.

Irritable – I’m also feeling very irritable and those sneaky awful feelings of depression are coming back. I notice that always happens when my eczema gets bad, so I know there’s a direction connection between the gut and the brain! I notice I have little to no patience, feel out of control and disorganized, things like that.

Stomach Pain – There have been many times in the last few weeks that my belly’s been distended, hurt and I got a lot of gas after eating even a GAPS approved meal (full GAPS diet, that is). So, there is no doubt in my mind that my gut is still inflamed and not healed. It’s better than before, but not healed.

Anyway, I’m starting off at the worst I’ve felt in five months, so it’s the perfect time and motivation for me to kick this into high gear and get going on doing this diet for real. As I progress, I’ll come back and share how it’s going and if I’m doing better!

So, wish me luck! Any out there who have gone before me? What are your tips and advice?

Cara’s book has been a godsend, truly. I made boiled meat patties at the beginning of the week and have used those as quick snacks to grab when I get hungry. Plus all the veggies I cut up and froze have been super easy to make soups with, which is a big part of this diet. I’ve also combined some things the Specific Carbohydrate diet allows, one of which is homemade jello with water, gelatin, and fruit juice (from manufacturers who do not add sugar or use concentrate). That has been my favorite snack by far! Plus, I’ve noticed I’ve had to drink more water and am thirsty, which is an indication that I need more carbs. One major improvement was my energy is back up and my irritable bad attitude is gone, my whole family thanks me for that (poor schmucks!).

Anyway it’s going very well so far. It’s not nearly as hard as I thought it’d be. I think it’s because I’ve already been on the full GAPS diet for 5 months – I really don’t feel like I’m being deprived. And I’m already SO used to not cheating – I’ve really disciplined myself these past five months that temptation isn’t worth it anymore. My eczema has improved only slightly in three days, but I did go off my probiotics as it is recommend to do.