Welcome back to week #6 of my Homeschooling Made Simple series! Today, I’m happy to welcome Cynthia of “Feeding Big” to the blog. Her daughter, who now has a 3.92 college GPA, was successfully homeschooled from third grade through twelfth grade and Cynthia cherished every moment of it. I asked Cynthia some questions to help us homeschooling newbies, and here are her thoughtful, helpful answers full of experience and wisdom! 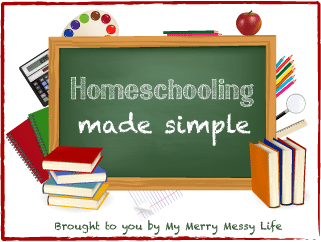 1. Why did your family choose to homeschool?

My daughter attended a private school for Kindergarten and Public school for 1st and 2nd grade.  While she was in second grade, I began to notice that she was bored and wanted to stay home often. I chatted with her teacher and it turned out that my daughter would finish her school work early and then have nothing to do. The teacher tried to keep her busy, but was unable to, so I began to send additional work to school for her. The other children wanted to see what she was doing and it began to disrupt the class. About the same time, I met a lady who was homeschooling and the idea began to blossom.  I made the decision to homeschool when my daughter finished her second grade year.

2. How long did you homeschool?

I began to homeschool my daughter when she entered the third grade and continued to school her through high school graduation. 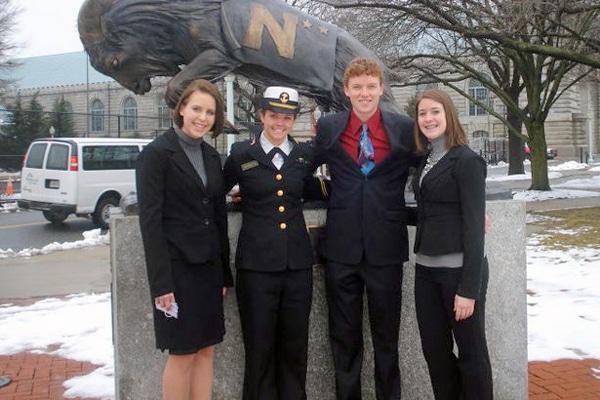 Cynthia’s daughter as a delegate for the US Naval Academy Leadership Conference – pictured on left.

3. I am fascinated by homeschooling, but am overwhelmed at the same time to know where to begin. What is the very first thing a newbie like me should do?

My suggestion would be to relax and get to know your child (children). I know that may sound funny. We all think we know our children better than anyone, and we do, just not from a learning standpoint.  Ask yourself some questions about their learning style. Can they sit for a long time? Do you think they would learn better from a structured schooling or a more relaxed approach, such as unschooling? Take a few minutes to really talk to your child and see what they think their day would look like.  Also, it is important that you have the support of your other half and your immediate family. You may get some negative reactions from them and you need to be prepared. 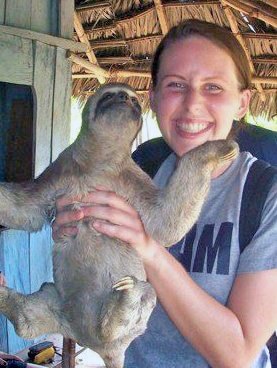 Holding a sloth in Peru!

4. What would you say are the pros and cons to homeschooling?

I think the biggest pro for our family has been that it has created a wonderful bond. We actually enjoy each other and really miss each other when we are apart! My family has moved every two to three years (job-related) and as a military brat, I know that can be hard on a child. Homeschooling actually made the transition easier.

I have always found homeshoolers to be more accepting, and think perhaps it is because they are “different” and therefore more accepting. Homeschooling taught my daughter to communicate with people of all ages. She could talk to adults just as easily as she could to a same age or younger child. This has aided her now that she is in college.  She has no fear of her professors and they have often mentioned that they enjoy being able to talk to her in a more informal way.

5. What type of curriculum or philosophy did you use? (Did you buy it? I’m worried about the cost as opposed to public school).

When I first began to homeschool my daughter, I purchased many different types of curricula, which was very costly. I learned that not all of the books were needed and the years after, our list of things that we needed became much shorter.

As a matter of fact, we used a lot of literature books to lead us to learn. Much of the time, my daughter was somewhat unschooled. We would pick an interest and go for it. Once, she wanted to learn about China. We decided to cook chinese food, learn to use an abacuss, write our names in Chinese, read literature and we would even try to watch movies or the history channel.  Museums were a bit part of our schooling.  4-H and Girl Scouts played a big part in my daughter’s learning. She would work toward badges and learn so much in the process. She entered many writing contests and this taught her to write for someone other than her mother! She did well as even won some prizes! This made it more fun for her.

My daughter was very involed in Dance and Tae Kwon Do also.  It was also very important for us, as a family, to volunteer and help out those who need assistance. I always told her that even though she might not have it all, she had more than many others. Because of this, her degree is in Leadership with an emphasis on Non-Profit Organization.

She loves school and learning, and I think she gained this love from being able to explore learning instead of having learning crammed down her throat. She is an active child and is not a shut-in, like many folks think when they hear the word “homeschooler.” 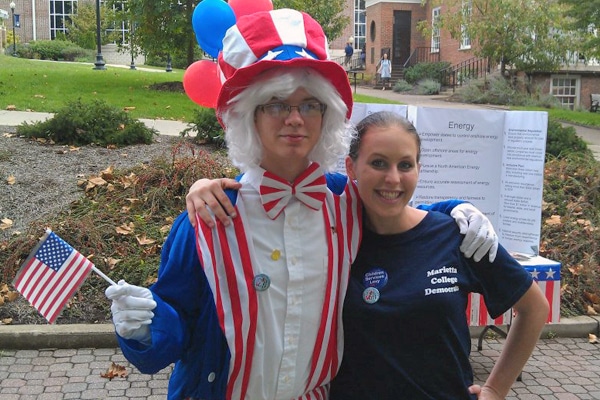 Posing with Uncle Sam’ during the 2012 election season, to educate students on their voting rights.

6. I have always assumed that it’d be very difficult to be both mother and teacher and that I’d feel overwhelmed. Public school gives us all a break from each other. How did you balance that?

I never felt the need to balance this. I enjoyed my daughter being around and can’t imagine it being any other way. I have never felt I needed a break from my child. I know I often hear parents say, “I can’t wait for school to start.” I must say, I don’t understand.

7. Were you part of a support network, club or homeschool group? For me, I think this is essential for my success as I will need a lot of support at the beginning.

As I stated earlier, I think it is important that you have the support of your immediate family. My mother and father thought I was nuts when I decided to homeschool my daughter. Now, of course, it is the best thing since sliced bread. My mother has been known be in a crowd of people with kids and  say to her friends,  “I knew they were homeschooled, they were so polite and had manners!” I also think it is important to belong to a homeschool group. It is nice to hear others say they are stressed, or at times feel like you are a failure or ruining your children’s life!  (You will have days like that – I did). It is also a fun way to have some group classes and outings. 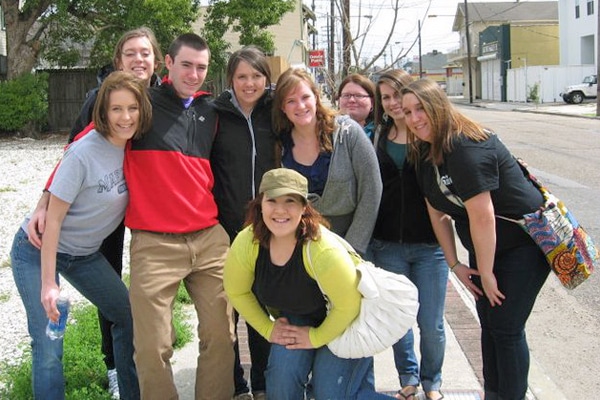 Group picture from a community service project to New Orleans.

8. Was your daughter involved in extracurricular activities? How did you go about finding them?

My daughter was in 4-H (I thought it was the best), Girl Scouts, Dance, Tae Kwon Do. I would go online to find the groups and also ask around.

And where is Cynthia’s daughter now? Was homeschooling successful? You betcha!

My daughter will graduate this May as an Honors Student with a Degree in International Leadership Studies with an emphasis in Non-Profit Organizations. She will have Minors in Spanish, Political Science and Management. She has a GPA of 3.92. She attends Marietta College in Marietta, Ohio. It was not difficult for her to get accepted to the colleges to which she applied. Her ACT score was a 32. Many colleges, including the big name schools, are eager to get homeschoolers to apply and will make a few exceptions to their rules. It is proven that homeschoolers are self motivators and that is what colleges look for. Little bit of a brag here, she was wait-listed at Wellsley! She would not have gone there, too far from home, but I always told her to shoot for the best.

Some additional accomplishments include:

Cynthia is the woman behind the blog, Feeding Big. She is the proud mama of a homeschooled daughter, who was taught from second grade through high school, and she loved every minute of it. With her daughter off to college, she is discovering she has more time for herself and “feels like a kid in a candy shop!”  Along with blogging, she spends her free time cooking, quilting, sewing, knitting and gardening. A note from Cynthia – “I would like to take a moment to thank Sara for allowing me to talk about my experience with homeschooling my daughter. Although my daughter will soon graduate from college, this is a subject that is near to my heart.”

Watch Me Lose My "Mummy Tummy" - Diastasis Recti
Our Gender Reveal Party and Baby Announcement!
Easy Veggie Chips Your Kids Will Love
We're Moving to Germany! The Story of Our Grand Adventure