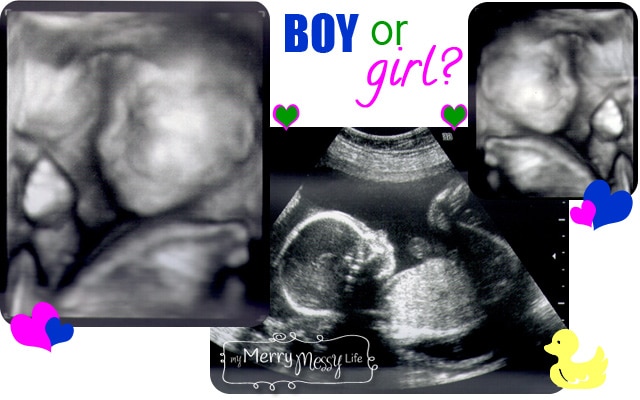 Yesterday we had our 20 week sonogram for baby #3! For those of you who have been following me for a while, you know I already have two rambunctious, energetic little boys (ages 3 and 1) so finding out the gender of this baby is a BIG deal. I am quite the girly girl and don’t have a tomboy bone in my body, so I find it quite funny that I’ve (so far) ended up with two boys who couldn’t be more full of testosterone and pure boyness. I am proud of myself though – I’ve become quite good at making machine noises, wrestling like a bear cub, have educated myself on all the different parts of the most popular construction machines (like a boom and a ram), and allow them (and myself!) to get dirty all the time. Dirt is like a staple around here – if at the end of the day someone doesn’t have dirt on them somewhere, there must be some sort of cosmic interference!

Since I love surprises, I decided to delay the gender-knowledge-gratification a little longer and have a party to reveal the gender! I’m learning these gender reveal parties have become quite trendy, and I myself got the idea from a friend. During our ultrasound, the technician didn’t tell us the gender but rather wrote it down on a pretty little card we brought. I then took that card to a local bakery, and they are making a cake where the inside will be either pink or blue, so when we cut the cake, we’ll find out the gender of the baby! I pick up the cake tomorrow morning and we are having a family party at a nearby park.

I love this idea because we get to share this special moment with all the people who are closest to us at the same time! It will be very exciting if the baby is a girl, obviously, however, we both laughed the other night while thinking of having a boy, when the two we’ve already got think entertainment means banging your head on a wall to see what kind of noise it makes. Just wait till they discover farting noises. They have become best buddies, so another boy would be fun, too, but I will have to mourn the possibility I’ll never go prom dress shopping or the mother of the bride. But I also won’t have to pay for a wedding either!

I’ll be posting pictures from the party – keep your fingers crossed that we can get the actual reveal moment on camera so you can see it! Before we left the sonogram room, I asked the lady if she could for sure tell what the baby is – she answered, “Ohhh yeah! Mmmhmmm!” You know what that means? Yep, I think it’s a boy. I mean, how else could she be so sure without some sort of cocktail wiener making an appearance? Stay tuned for the announcement!