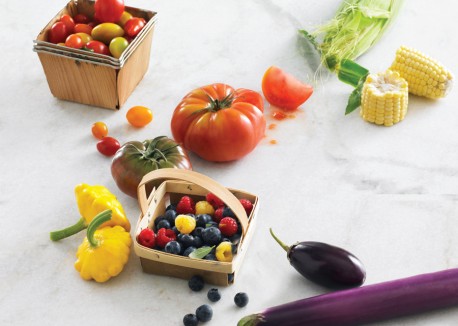 I’ve been flirting with becoming a vegetarian for about a year now, maybe longer, much to the influence of my mom and parents-in-law who eat very little to no meat. I was raised on healthy food where we ate a low-fat, low-calorie diet, not that I was happy about it at the time, though! I cringed knowing my best friend down the street got to eat at McDonalds and have Little Debbie snacks after dinner. I’m grateful now for the good habits I was taught.

As an adult and now a mom, I’ve been cooking without meat more and more to be healthier (less fat and cholesterol), and to save money, and because I want to buy only organic meat but financially am not always able to. I’ve found I hardly miss meat at all. For us, at least, going semi-vegetarian has been pretty easy, not to mention, cheaper. Plus, by accident, I started eating less meat myself after Gabe, our first child who’s now almost three, was born since he just couldn’t chew it. And then another mouth of gums came along and the habits continue.

So, I got really excited when I recently discovered that it’s actually green to eat little or no meat! The very green thing to do, however, is to go vegan, since dairy products still have quite a carbon footprint, sometimes more than meat. More on that later.

How is it green?
Meat production itself harms the environment. How? Two words – methane gas. In this case, cow flatulence. Yep, that stinky gas is doing more short-term damage to the environment than carbon dioxide from cars and deforestation, among other things. Animal agriculture is the biggest producer of methane. According to brighthub.com:

Other harmful effects of meat production include pollution from cow excrement (this just gets smellier, doesn’t it?) and land usage on large-scale farms where cows are not allowed to graze. (Small, local farms do not have this issue as the cow excrement is manageable – it is absorbed into the ground while grazing and acts as a fertilizer.) Animal agriculture uses more land than crop production, and you must have both for the animals (they eat the crops). As for the cow patties? Large scale farms store them and the urine in massive lagoons, some as large as football fields, and also spray the waste over fields as fertilizer, all of which leak into the surrounding ground water and water supply, polluting it. Bleck!

UPDATE: Ethical Treatment of Animals & Meat Eating
Of course, I haven’t even begun to delve into the ethical problem behind meat production in our time. The facts alone would make you want to be vegetarian and vegan! Large-scale farms are meat factories where animals are NOT treated humanely, and I do have a huge problem with that. Thus, I feel I can eat meat when I know where it is coming from, like a small, local farm where the livestock can roam free and eat nutritious or organic diets.

Real Food Forager approaches this issue from a different perspective in that humans have evolved to eat meat, just like a lion or other carnivorous animal and eating meat in and of itself is not unethical. Same with this winning essay, printed in the New York Times “Give Praise for Meat.”What is your opinion?

Going Semi-Vegetarian Is Good, Too
So much of our culture and holidays are centered around meat – picture summer barbecues, turkey at Thanksgiving, and ham at Christmas and Easter. So it’s a big change for us cowboys and girls to switch completely to being vegetarian (I’m sure some would even call it un-American). According to the blog, Well, at the NY Times, about 23 million Americans say they rarely eat meat, 7.3 million are vegetarians, and only one million are vegan. So I really enjoyed an article on good.com, about how you can help the environment by even being semi-vegetarian, something which many of us are more likely to do. How is that helpful? Because it takes high quality land and energy to grow fruits and vegetables (due to crop rotation), and dairy products have just as much, if not more, of a carbon footprint as meat production. According to sciencedaily.com,

“A low-fat vegetarian diet is very efficient in terms of how much land is needed to support it. But adding some dairy products and a limited amount of meat may actually increase this efficiency, Cornell researchers suggest.”

I’m happy to read that, as I’m not sure I’m ready to take the full vegetarian plunge. If you are, stick around because one of my husband’s colleagues, who’s a published writer and college professor, is going to share what it’s like to be a vegetarian. I think one of the best things we can do is to buy fresh, buy local, even when it comes to meat. Small animal farms are much more environmentally friendly than large-scale ones, more humane, and might even be organic.

So, this next week, I’m going to to take you on a journey of being semi-vegetarian in our house, with helpful recipes. Then, you can decide what’s right for you – because both will help our health and mother earth!

See the next post – A Mom Dishes About Being Vegetarian. All about how she raised her kids as vegetarians and what kinds of meals they eat.

A great resource for vegetarian recipes is the Vegetarian Times. You might also check out their article, “Why Go Veg?”

Sources:
Why Eating Some Meat May Be Better for the Environment Than Going Vegetarian https://www.good.is/post/why-eating-some-meat-may-be-better-for-the-environment-than-going-vegetarian/
How Eating Vegetarian Helps the Environment https://www.brighthub.com/environment/green-living/articles/18363.aspx
Diet With A Little Meat Uses Less Land Than Many Vegetarian Diets https://www.sciencedaily.com/releases/2007/10/071008130203.htm
The Challenge of Going Vegan
https://well.blogs.nytimes.com/2012/04/16/the-challenge-of-going-vegan/
Cesspools of Shame: How Factory Lagoons and Sprayfields Threaten Environmental and Public Health
https://www.nrdc.org/water/pollution/cesspools/cessinx.asp
Waste
https://www.sustainabletable.org/issues/waste/
Boss Hog: The Power of Pork
https://www.pulitzer.org/archives/5892