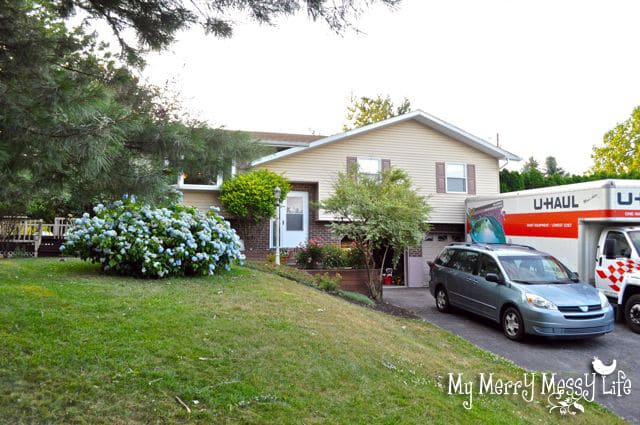 Moving Day – with a little help from U-Haul

It’s been seven weeks since we left the first home we ever owned in Pennsylvania and moved back down south, and I’m just now ready to write about it. It has taken that long to really settle in and find our groove again, and its been harder for me than I ever thought it would be, even though it was me who wanted to move! It’s been an emotional, exhausting journey, but still totally worth it.

See, when Kevin and I first got married, we were ready for adventure. I had lived in the Atlanta, Georgia area my entire life and wanted to live abroad so badly. I married the right guy (good thing, right, since I’m pregnant again!) because he whisked me away to France where he got a job teaching at a university and we lived there for two years. I got a huge filling of adventure there where we had the time of our lives! We made some amazing friends, traveled all the time and saw Europe, and established our relationship as a newly married couple. Towards the end of the two years, we decided not to renew his contract as we had the baby bug and wanted to go back to the states where he could get a tenure-track position, settle down, and make babies (smile, we’re a little too good at that part!). He got a job at Penn State and we moved there.It’s been seven weeks since we left the first home we ever owned in Pennsylvania and moved back down south, and I’m just now ready to write about it. It has taken that long to really settle in and find our groove again, and its been harder for me than I ever thought it would be, even though it was me who wanted to move! It’s been an emotional, exhausting journey, but still totally worth it.

We found a great first house for us, with almost an acre in the country, and turned our house into a warm, cozy home. I was very excited to be in a colder place, enjoying all the snow, learning about Pennsylvania Dutch food and culture, but really felt lonely since we had no family close by and knew no one there except Kevin’s colleagues.

Thankfully, there were job openings at a university near my parents, and last year, Kevin applied. He never heard back and I was devastated, as Grayson was on the way and I needed my family more than ever. Then, about six months later, we heard the budget had been cut and the job was, too, but they wanted him to reapply because they were going to reopen the position the next school year. Kevin reapplied and within a week, he’d heard back and they wanted him to come down for an interview. Long story short, he got the job!Then, once Gabriel arrived, just 11 months after moving in, I was desperate for my mom and dad to be nearby and Pennsylvania started to lose its appeal. I’d had my fill of adventure and just wanted to go home. Not only are my parents in Georgia, but all of my extended family is, too! You just need your mom when you have a baby, especially with your first. I felt like I was sleep walking as I just had no idea what I was doing and didn’t even have close friends yet. When Gabe was about three months old, I found a MOMS Club chapter in our town and joined – it was the single best thing I ever did for myself there! I made a best friend, Amy, and she had a baby boy about the same age. She was also a long way from home, so we really connected. We got each other through that first year, but both of us longed to go back home to our families. I ended up becoming the president of that chapter last year, and it was a joy giving back to the club that had given so much to me. 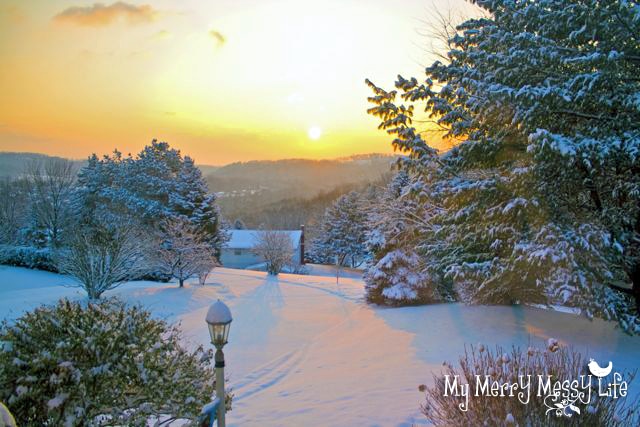 Here is the view out of our old living room window and the snow I will always miss. Just doesn’t ever look like this in Georgia, but we do have pecan pies, friendly faces, and sweet tea.

The move was rough with two small kids, two cats, and a pregnant mama. We couldn’t have done it without all of our parents – Kevin’s parents came to visit for two weeks and we got a lot of packing done. Then, my parents came to help us finish packing and complete the move. My mom and I got the kids ready and we made the 14-hour trip during the night and arrived exhausted, but happy to be here. My dad and Kevin stayed behind to stuff the moving van – a 26 foot U-Haul. They had to do a few Houdini tricks to get most of the stuff in, but some things, like our playground, got left behind.  It took us all a good two weeks to recover.We put our little house on the market and within two months, we got a contract. It just closed two weeks ago and even though we lost a considerable amount of money due to the bad housing market, we are okay because we are living rent-free with my parents. 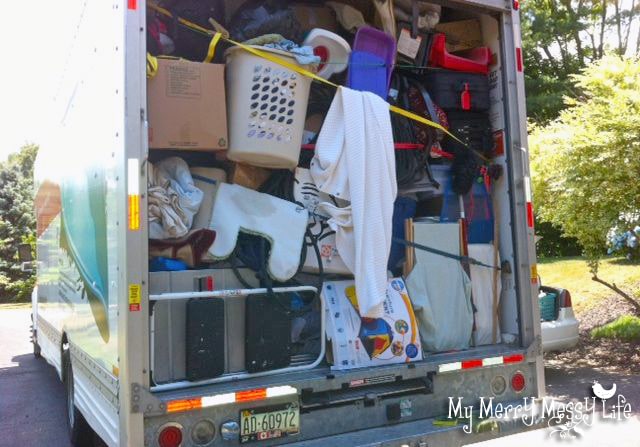 My dad and Kevin worked tirelessly to pack and stuff this truck – doesn’t get more stuffed than that!

We saved some money by buying all the boxes off of Craig’s list and driving the moving van ourselves.  And my parents have been wonderfully gracious and have been very easy to live with, but it has been hard for me to live in a house that isn’t mine. I’m desperate for my own vegetable garden, my own plants to care for, my own walls to decorate and a kitchen with windows (we’re in the basement). And all of our normal family routines have been thrown upside down and sideways. I’m not complaining, but am just recognizing that it was more difficult of a transition that I had imagined. But I know that I’ve got it really, really good and am very blessed. Moving is never easy, though, is it? I’m incredibly happy to be back home, and have so enjoyed getting to see family members in the short time we’ve been here. I will always miss Pennsylvania and the wonderful friends I made there. There’s no place like home. 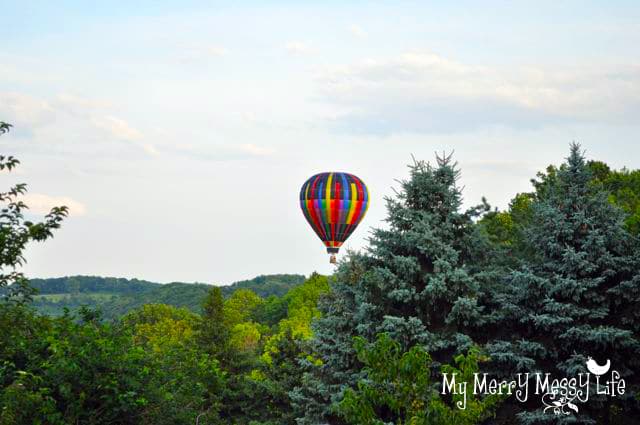 As we were getting into the car to drive away for the last time, a hot air balloon flew over the house. What a wonderful way to say goodbye to our little house on the hill where our first two children were born.