As moms, it’s easy to experience mom burnout – where we are taking care of everyone else’s needs but our own. We can find ourselves exhausted, lost, in a fog, maybe even dealing with depression and anxiety. Here is Jen Riday’s story, of the Vibrant Happy Women podcast, and how she found her way back to herself! 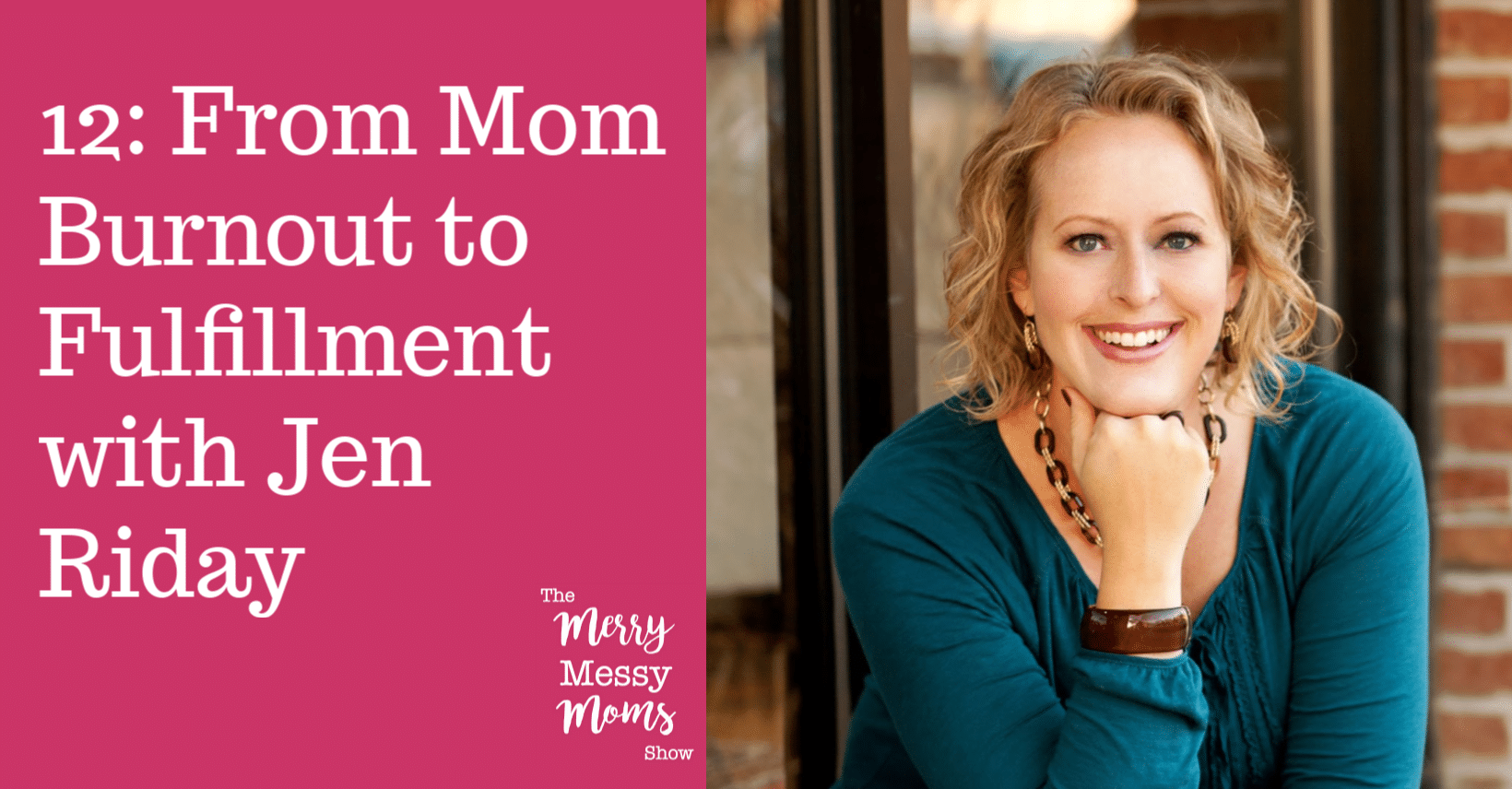 Sometimes one of the most courageous acts of self-love is to throw out our social ideas of what it means to be a mom and do what we feel called to do instead. For Jen Riday, a podcaster, Life Coach, blogger and mom of six, that has meant choosing to prioritize her own happiness and become an entrepreneur. She talks about her journey of going to rock bottom in her marriage and her own mental health, to turn it around to create a successful business and fulfilling life for her and her family.

Jen Riday is the host of the Founder of the Vibrant Happy Women movement and the host of the Vibrant Happy Women Podcast. She’s also a mom of 6. Jen helps women to heal their hearts and increase self love so they can more easily love those around them. Jen lives in the woods just outside of Madison, Wisconsin and loves yoga and hiking in her free time.

Links in This Episode

Jen has four kids, ages 5-18, and she has a Ph.D. in human development and family studies and she left it all to raise her kids.

She chose to stay home and raise her children, even though she had a Ph.D.

Jen says that grad school and academia can be very political and that turned her off at first. And bigger than that she’s always thought about her contribution to the world and she felt strongly that the most important contribution she can make is through her posterity – her children!

And she’s still always balancing those contributions through being a mom and her podcast and her blog.

In her studies, she read all of the research on parenting and families and really felt like she was going to be the best mom! She judged other moms.

So once she became a mom, she tried to be the perfect mom so she wouldn’t mess her kids up. There was a time early on, where she was baking homemade bread (6 loaves!) every week! Now she thinks – what on earth was I thinking!

She reached a place of burnout where she found herself yelling often at her kids, and feeling resentful towards her family because she had drained her cup too much. 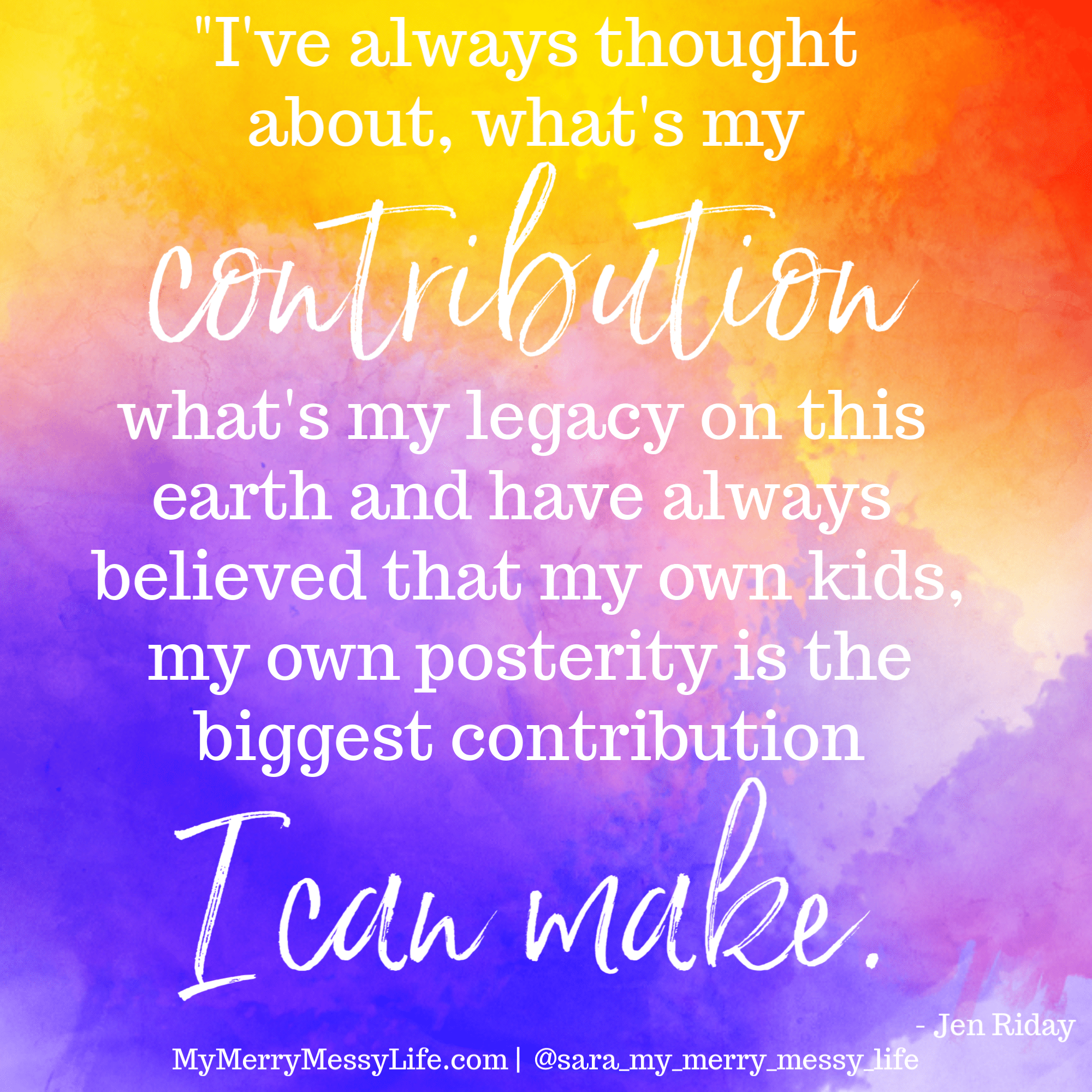 It all came to a head when they got pregnant with baby number six, which ended up being a miscarriage. She had experienced other miscarriages and she could reframe it and believe that this was not a loss, but that spirit was waiting for the perfect body.

But physically, she wasn’t feeling well and it was Christmas morning. She was dizzy, lightheaded so she and her husband drove an hour away to the nearest hospital and they fought the entire way. Part of the reason was because they were visiting her inlaws and it had been stressful.

She pulled the victim card of – what kind of monster would fight with a woman who’s having a miscarriage? And he was feeling like she was being so controlling and negative. She was so mad at him she made him stay outside while she was being examined! It was one of those times when everything went wrong – they thought she was high, couldn’t get the IV in, and they didn’t even believe she was pregnant!

They drove back to her parents house in complete silence. And she decided that day – I have got to start being happy.

She decided it was time for her to be happy

She began walking, eating healthier, letting her husband do more cooking (which he happily did because he wanted her to be happier!), going to yoga, reading personal development books.

Then they got pregnant two years later and had their sixth and last child, Cora, and she was 18 months old. She was in a yoga class and was thinking about what she’d like to do next with her own life. She clearly heard – become a life coach. And that journey led her to her podcast and her work helping women to help them find their purpose, peace and happiness.

Stop trying to fulfill a social idea of a “good mom”

Where women are stepping up, being vulnerable, realizing they can be great moms and fulfill other desires, too. When we give up what we want to fulfill a perceived social idea of what a mom is supposed to look like then we aren’t happy or fulfilled, which doesn’t help our families.

Now she responds intuitively and shows up way better as a mom because she is feeling fulfilled. 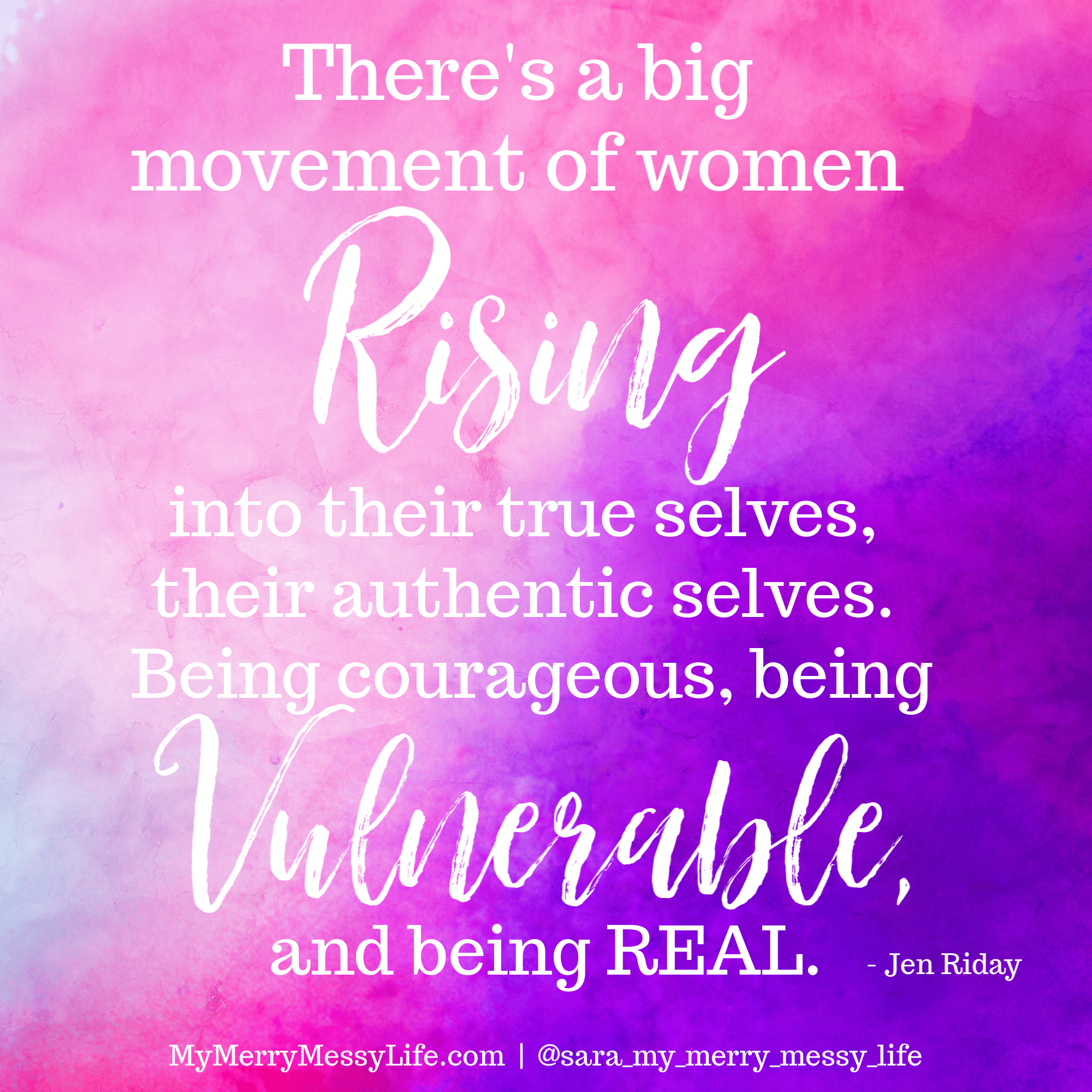 Gretchen Ruben’s books, The Four Tendencies and Better than Before, has helped her to understand her children and her husband more. There are:

Her whole family is a blend of Questioners and Rebels so she’s needed to develop finesse, in order to get cooperation from her family, to make them think every idea is their own idea! They are stubborn, independent, outspoken and opinionated people – not peacemakers or people pleasers. She says it can be chaotic.

She asked herself for years – why is my husband so stubborn? Why are my kids so hard? She realized those are very disempowering questions. And shift it to an empowered question – how can this family help me to be my best self? This family is what’s helped her to be much stronger and gave her the fight and the courage to set out to start her own businesses. Plus she can share what she’s learning through her work and her clients and listeners see that she’s in the trenches with them, not on some high horse, and she can relate with what others are going through.

Her and her husband, who’s a very left-brained scientist, did go to therapy so they could communicate better, and her husband learned how to vocalize his emotions. She’s a huge believer in therapy and coaching now! And so are her children because they’ve seen the difference it’s made in their parents.

She had to toss her training from grad school aside and learn to work with the children she had right in front of her. So instead of asking them to do their chores, she found she had to tell them to do the opposite for it to work!

Tying behaviors to their identity has also helped her rebels to want to comply.

She’s found she has to be a detective when it comes to tantrums to figure out the root cause so it can be solved. 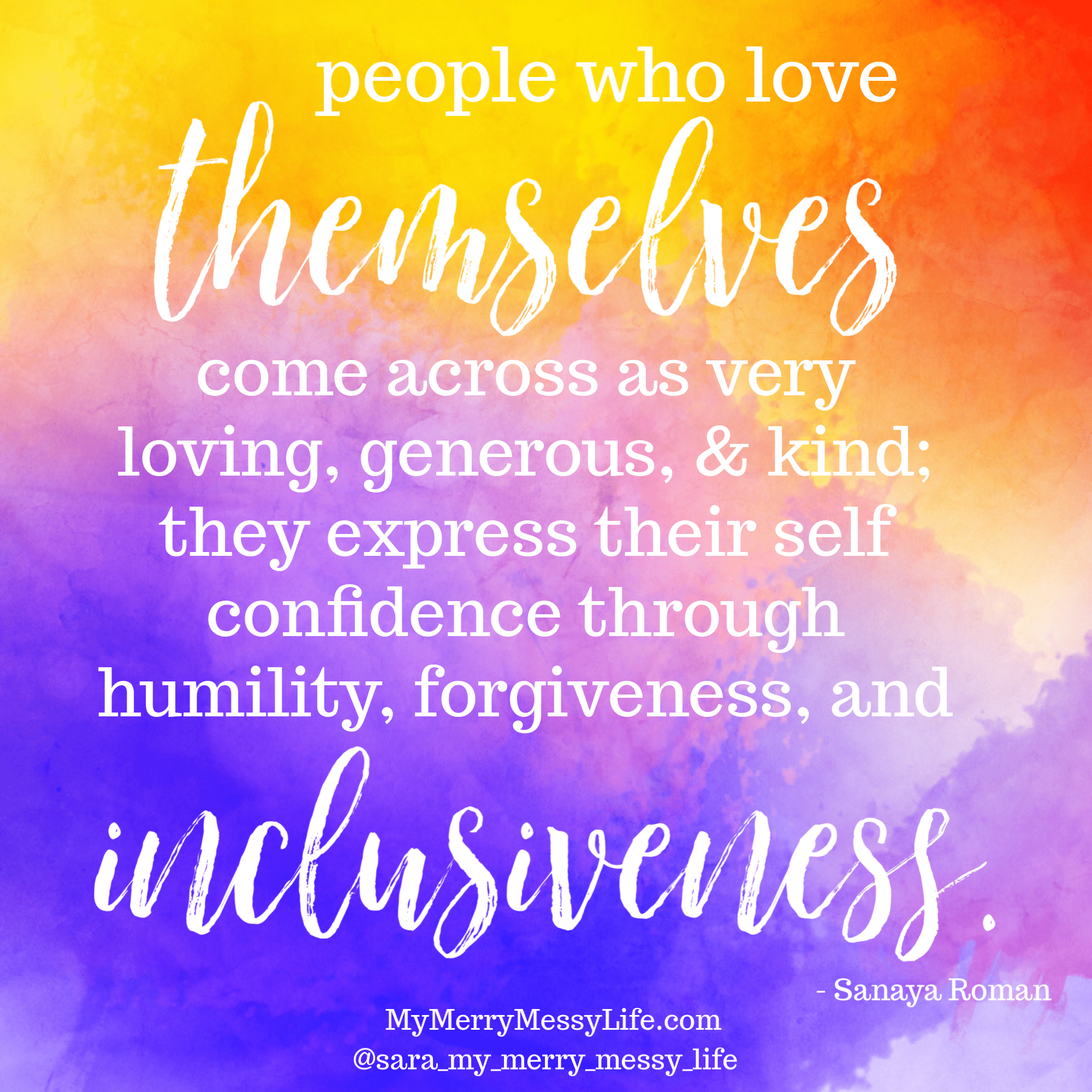 Life coaches master the art of the open ended question. Instead of saying, “why are you doing that?” she says to ask questions that start with “what” because they are much more empowering and open the person up instead of make them feel defensive or closed off. And asking questions to lead her kids to their own conclusions, as opposed to lecturing them and telling them your conclusions.

So with her teenagers, instead of saying, “why were you late?” or “what were you doing?” She asks, “What did you gain tonight from being late?” or “How do you think that will affect you tomorrow?”

But because her kids are smart, they sometimes tell her to stop coaching them! She can’t ask too many questions or they figure out what she’s doing!

So she’s found success in tying it to their identity by saying things like, “You are very extroverted and you love people, so I can see why you wanted to stay longer at that party.”

But of course, she’s human and sometimes she throws in the towel and says, “Get your act together! Stop!” But then she feels bad and says she sorry and corrects it.

We all have wins and hardships!

Advice on the Teenage Years

The teenage years are challenging in the same way that the early years are, just in a different way. You’re getting more sleep and not as physically exhausted, but there’s more emotional exhaustion.  Many teenagers have difficulty seeing into the future and a challenge is to help guide them to think about the long-term consequences of their actions.

Be careful to not impose your desires onto your children

Both Jen and her husband have PhD’s so she does realize if she’s going to raise her children to be independent and unique, they may not choose an academic route at all.

So when their first son started to not get all A’s, she and her husband were flabbergasted because both of them had always had A’s! But then she had to learn that it wasn’t the end of the world!

She likes to actually think of the worst possible scenario to quiet her worries and embrace what’s happening. So what if it doesn’t go to college? What’s going to happen? He starts working somewhere, maybe McDonalds. And she realizes he’ll still learn, and grown and find his way and he will probably need to learn through the hard knocks of life as a rebel tends to learn.

She did have to grieve for several weeks when she realized that her oldest might not go to grad school. But once she learned from that, she’s been able to help guide each of her children to find their own passions and desires and is happy even when they make B’s or worse.

Accept what is and release resistance and life will flow to you – great advice from Abraham Hicks.

Help them find their passions, or their cause

And with strong-willed, rebel, intellectually minded people who’ve got to figure things out for themselves, as parents we can reframe it to see that that rebel nature can be used a force of good in the world to fight for justice, stand up for peace, innovate and find the areas in our lives where the status quo isn’t good enough and should be fixed, improved upon or totally changed. They are the trail blazers of our society and can do so much good to improve our world! It’s not only a bad energy.

Her husband once took an ax to a door to get it to open! Her mother in law says that he was quite the rebel growing up, so it’s no wonder they have six smart, independent thinkers as children!

Part Two will Air Next Week!

Stayed tuned for part two which will air next week when we discuss mediation, self care, and how we balance things as working moms with home-based businesses!

See all of my podcast episodes here!

How Moms Can Have a Meaningful Career We Love
How Hobbies Can Help You to Live Your Best Life
23: Four Reasons We Nag Our Husbands and How to Stop
10: From Poverty to Success, One Mom's Inspiring Story with Samantha Lee Wright