After one week on the GAPS intro diet, based on the book Gut and Psychology Syndrome by Dr. Campbell-McBride, I have survived and have done quite well! I’m proud of myself for sticking to it. Here’s how my first week went.

First off, the eBook I bought from Health, Home and Happiness, “What Can I Eat Now? 30 Days on the GAPS Intro Diet” book has been a godsend! I don’t know what I would’ve done without that except go CRAZY cray cray. 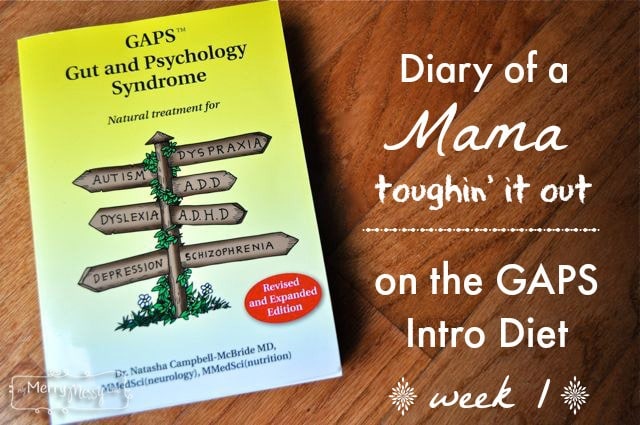 Here’s What I’ve Been Eating 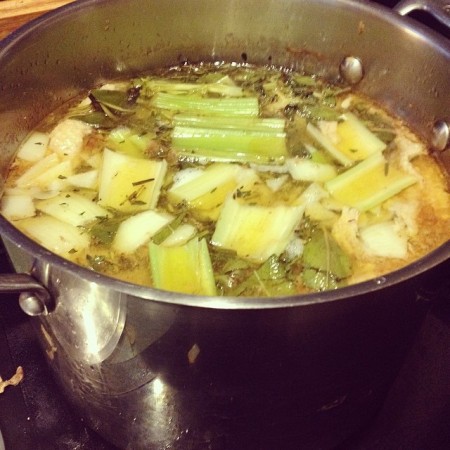 Meal Prep Was A HUGE Help

I made boiled meat patties at the beginning of the week and have used those as quick snacks to grab when I get hungry. Plus all the veggies I cut up and froze into separate bags have been super easy to make soups with, which is a big part of this diet. All in all, I have not been stressed AT ALL this week making meals for both myself and my three kids and husband, cooking three times a day. The meal prep is the reason why, I’m convinced!

Coffee is My Schtick

I tried giving up coffee the first day, and drank green tea instead. But I still ended up with a major headache and took acetaminophen to make it go away. Yes, that is terrible! NSAID drugs like acetaminophen are known for damaging the gut. Thankfully that was the very first day, so I didn’t have any progress I was messing up. So, I’ve continued to stick with one cup of coffee and will try to get rid of it later on, when the diet gets a little easier. I decided I couldn’t handle getting rid of it along with everything else and cooking meals for my family, too. Whew! I’m not superwoman.

One major improvement was my energy is back up and my irritable bad attitude is gone, my whole family thanks me for that (poor schmucks!). BUT my eczema is still pretty bad on my hands, although it is better than at the beginning of the week – I’m still getting new blisters and they as dry and rough as sandpaper. Not sure if there is still an offending food. I did have an upset stomach twice today, both times after eating soup! So, I’m wondering  Plus I’m constipated and while on the full GAPS diet, I was never constipated.

Anyway it’s going very well so far. It’s not nearly as hard as I thought it’d be. I think it’s because I’ve already been on the full GAPS diet for 5 months – I really don’t feel like I’m being deprived. And I’m already SO used to not cheating – I’ve really disciplined myself these past five months that temptation isn’t worth it anymore.

I went off my probiotics at the beginning because I thought that’s what I was supposed to do, but I read on gapsdiet.com that you stay on probiotics the whole time! So, I hope that will help.

The key to remember about the GAPS and SCD diets is that you’re eating the most easily digestible foods to give your digestive system a break so it can effectively kill off the bad bacteria and yeast overgrowth (Candida) and heal the gut lining. That’s why all the vegetables and meat are thoroughly cooked. Once you’re healed and sealed in about four to five weeks, you can transition to the full diet where a lot more food is allowed, but still off of grains and sugar.

Read the first post in this series, Diary of A Mama Toughin’ It Out on the GAPS Intro Diet